Commitment To Education And Sustainability

Forest sustainability, forestry and the forest industry are among the most environmentally friendly of human activities, contrary to common perspectives. 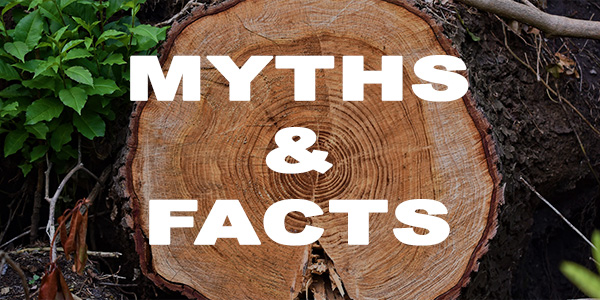 Select A Myth To Reveal A Fact

FACT: The pre-Columbian forest of 1600 covered less than half of the present-day U.S.
FACT: This figure wrongly assumes that the coastal Northwest was covered with old trees before the arrival of settlers from the East. According to U.S. government studies, no more than a third of the region’s forest was covered with old-growth trees at any time. Natural wildfires, and fires set by native Americans, routinely cleared vast swaths of old forests.
FACT: Salvage logging cannot proceed without an approved Environmental Assessment as required under the National Environmental Policy Act and a Biological Evaluation as required under the Endangered Species Act. Moreover, a salvage sale can be stopped at any time – by a district ranger up to the Secretary – until the point when the sale is advertised.
FACT: We have more trees today then we had in 1970, on the first Earth Day – and even more than we had 70 years ago. In the middle of the last century, for example, Vermont, Massachusetts and Connecticut were about 35% forested; today they are 59%.
FACT: Forest growth has exceeded harvest since the 1940s.
FACT: In the U.S. today there are 13.2 million acres of old growth, i.e. large trees 200 years of age or older. The vast majority of these trees – comprising an area the size of New Jersey and Massachusetts combine – will remain in their natural condition and will never be harvested due to legal and regulatory prohibitions on logging, road building and even fire fighting.
FACT: The U.S. has permanently protected 104 million acres of land, much of it forested, in the Wilderness Preservation System. It’s part of a larger total of 270 million acres that is off limits to all commercial activity, including logging, mining and grazing.
FACT: Clear cutting is a sound practice that benefits future forests. By mimicking natural wildfires, clear cutting is widely recognized by forest scientists and even by conservation groups such as the Environmental Defense Fund, American Forests, and the Society of American Foresters as an ecologically sound technique for reforested many softwood species. That’s because conifer seedlings typically require sunlight from an open canopy and cannot survive in the shade.
FACT: Managed forests, even those with some clear cutting, often produce more biodiversity than completely natural forests, according the U.S. Forest Service studies in the lake States and New England. Even tree farm plantations contain a rich mosaic of plant and animal life.
FACT: In fact, good forest management is the environmentally preferred land use for wetlands, as confirmed by the National Wetlands Policy Forum sponsored by the U.S. Environmental Protection Agency.
FACT: Forest management helps wildlife. Forest management creates openings that stimulate the growth of food sources – which is the prime reason why forest species such as elk, deer, turkey and antelope are far more plentiful today than earlier in the century.
FACT: Even if we could recycle 100% of our used paper, we would still need “virgin” fiber to replace worn-out recycled fiber and meet the increasing demand for paper products. Recycling extends the use of virgin fiber, but it will not replace it. Even so, today well over half of all fiber used in paper products comes from recycles paper and from wood waste from sawmills.


We can handle any of your wholesale lumber or forest management needs!